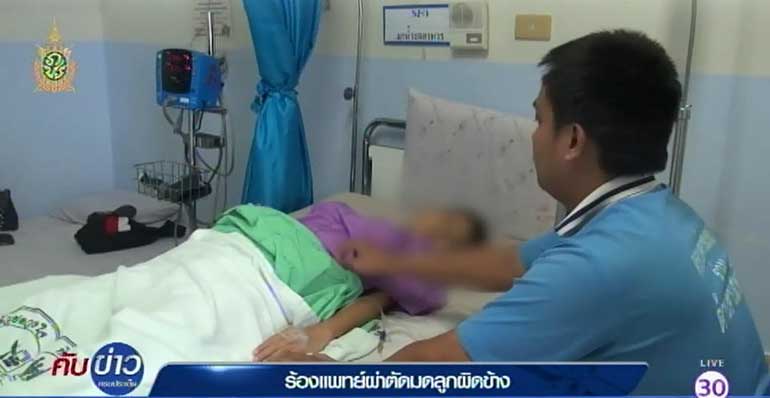 BANGKOK: — A Thai man has complained after surgery to remove a fetus that  was forming outside his wife’s womb went wrong. The man has claimed that despite providing a hospital with ultrasound evidence the surgeon removed the wrong side of his wife’s womb meaning that they can never have children again.

Incredibly after surgery to remove the fetus was done the clinic later found the child still inside and the operation had to be done all overagain, reported tnamcot.

Ekapong Kaewdee, 32, had taken his wife to a clinic after complications in her pregnancy. He told the press that an ultrasound showed that their baby, already seven weeks old, was forming outside the womb on the right and had to be aborted. Armed with a report andthe ultrasound evidence he went to a hospital.

He claimed that the doctor did not look at the evidence from the clinic and said that he had to extract the fetus that was  on the other side. Despite an argument in which it was claimed that bad language was used the husband eventually bowed to the surgeons status and agreed to the operation.

But a few weeks later his wife Suppatra Kaewdee, 30, complained of more pains and started vomiting. Another trip to the original clinic revealed that the fetus was still in there. The doctor was aghast that it had not been removed despite what he had told the parents. The doctor said it was now 10 weeks old.

But it still had to be removed and the couple went back to the unnamed hospital. A further surgery was done this time on the correct side but this now means that Suppatra can no longer bear children.

The hospital director stood by the surgeon saying that he was aware of the case and that according to what the patient had said the surgery was done correctly.

Ekapong has lodged complaints with the Thai Health Ministry and the Medical Council of Thailand over the matter.

A news conference has been planned for today (Tuesday).

0
0
0
0   0
previous Brutal murder of Swedish expat shot dead at home in Cha Am
next Does Thailand Really Need Submarines?